We have 6 guests and no members online

Are you shipping this product to California?

All of our ingredients and products test well within the internationally accepted safety standards for dietary supplements. If you would like to read more about Doctor Wilson's Original Formulations® stringent safety and manufacturing practices, please see our cGMP compliance page.yesWARNING:This product contains chemicals known to the state of California to cause birth defects or other reproductive harm.Continue >California's Prop 65 and Our SupplementsRecently, we started adding this Prop 65 warning sticker to our product labels. The warning has been added to comply with Proposition 65 so we may continue to serve our customers in California. The State of California requires a warning for any product in which a consumer would take in more than 0.5 micrograms of lead in a day. This threshold is 1,000 times lower than the level of exposure that has been shown to have no observable effect on humans or animals. You can rest easy knowing our products have been and continue to be safe to take.Lead is commonly and naturally found in soil, plants, and water. Many of the plants that our vitamins and nutrients are sourced from absorb and bind small amounts of elements such as lead from the surrounding soil and water. Even the herbs we use, which are grown organically or wild in nature, do this as well. No lead or other such substances are added to any of our products.

What is adrenal fatigue? (from Dr. Wilson adrenalfatigue.org)

Adrenal fatigue is a collection of signs and symptoms, known as a syndrome, that results when the adrenal glands function below the necessary level. Most commonly associated with intense or prolonged stress, it can also arise during or after acute or chronic infections, especially respiratory infections such as influenza, bronchitis or pneumonia. As the name suggests, its paramount symptom is fatigue that is not relieved by sleep but it is not a readily identifiable entity like measles or a growth on the end of your finger. You may look and act relatively normal with adrenal fatigue and may not have any obvious signs of physical illness, yet you live with a general sense of unwellness, tiredness or "gray" feelings. People experiencing adrenal fatigue often have to use coffee, colas and other stimulants to get going in the morning and to prop themselves up during the day.

Adrenal fatigue can wreak havoc with your life. In the more serious cases, the activity of the adrenal glands is so diminished that you may have difficulty getting out of bed for more than a few hours per day. With each increment of reduction in adrenal function, every organ and system in your body is more profoundly affected. Changes occur in your carbohydrate, protein and fat metabolism, fluid and electrolyte balance, heart and cardiovascular system, and even sex drive. Many other alterations take place at the biochemical and cellular levels in response to and to compensate for the decrease in adrenal hormones that occurs with adrenal fatigue. Your body does its best to make up for under-functioning adrenal glands, but it does so at a price.

There is considerable information throughout the website about many aspects of adrenal fatigue. For a comprehensive explanation of how stress and adrenal fatigue affect your health and what you can do to recover and protect yourself see Dr. Wilson's book, Adrenal Fatigue: The 21st Century Stress Syndrome.

Adrenal fatigue is produced when your adrenal glands cannot adequately meet the demands of stress.* The adrenal glands mobilize your body's responses to every kind of stress (whether it's physical, emotional, or psychological) through hormones that regulate energy production and storage, immune function, heart rate, muscle tone, and other processes that enable you to cope with the stress. Whether you have an emotional crisis such as the death of a loved one, a physical crisis such as major surgery, or any type of severe repeated or constant stress in your life, your adrenals have to respond to the stress and maintain homeostasis. If their response is inadequate, you are likely to experience some degree of adrenal fatigue.*

During adrenal fatigue your adrenal glands function, but not well enough to maintain optimal homeostasis because their output of regulatory hormones has been diminished - usually by over-stimulation.* Over-stimulation of your adrenals can be caused either by a very intense single stress, or by chronic or repeated stresses that have a cumulative effect.*

Who is susceptible to adrenal fatigue?

Anyone can experience adrenal fatigue at some time in his or her life.* An illness, a life crisis, or a continuing difficult situation can drain the adrenal resources of even the healthiest person.* However, there are factors that can make you more susceptible to adrenal fatigue.* These include certain lifestyles (poor diet, substance abuse, too little sleep and rest, or too many pressures), chronic illness or repeated infections such as bronchitis or pneumonia, prolonged situations that you feel trapped or helpless in (bad relationships, stressful jobs, poverty, imprisonment), or maternal adrenal fatigue during gestation.*

How common is adrenal fatigue?

Although there are no recent statistics available, Dr. John Tinterra, a medical doctor who specialized in low adrenal function, said in 1969 that he estimated that approximately 16% of the public could be classified as severe, but that if all indications of low cortisol were included, the percentage would be more like 66%. This was before the extreme stress of 21st century living, 9/11, and the severe economic recession we are experiencing.

How can I tell if my adrenals are fatigued?

You may be experiencing adrenal fatigue if you regularly notice one or more of the following:*

For more information, consult Dr. Wilson's book, Adrenal Fatigue: The 21st Century Stress Syndrome. It contains a wealth of insights and a series of tests you can do at home, as well as lab tests like the saliva test for adrenal hormones to help you determine if you are experiencing adrenal fatigue.* Also see Could I be experiencing adrenal fatigue?

Are there health conditions related to adrenal fatigue?

The processes that take place in any chronic disease, from arthritis to cancer, place demands on your adrenal glands. Therefore, it is likely that if you are suffering from a chronic disease and morning fatigue is one of your symptoms, your adrenals may be fatigued to some degree.*Also, any time a medical treatment includes the use of corticosteroids, diminished adrenal function is probably present.* All corticosteroids are designed to imitate the actions of the adrenal hormone, cortisol, and so the need for them arises primarily when the adrenals are not providing the required amounts of cortisol.*Find more information about the relationship between adrenal function and various health issues in Adrenal Function in Health Conditions.*

Yes, with proper care most people experiencing adrenal fatigue can expect to feel good again.* For detailed information about how you can help support your adrenal glands, promote healthy adrenal function and maintain your health during stressful times, see Dr. Wilson’s book Adrenal Fatigue: The 21st Century Stress Syndrome and check out Dr. Wilson’s Health Tips and his Program for Adrenal Fatigue and Stress on this website.*

Look at adrenalfatigue.org for more info.

Working Around an Injury 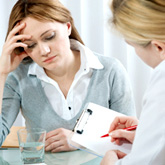 Q:  It seems as though  whenever I start to get into a groove with working out, something  happens to set me back. Most recently, I sustained an injury to my knee. Is it possible to keep exercising?

A: Okay, so you're injured — don't despair! With care and knowledge,  chances are you can still exercise safely.

But  before we get into that, I need to stress that I am not a doctor.  I get so many questions from people about specific injuries, and it would be  very irresponsible of me to diagnose your ailment and prescribe a course of treatment.  I strongly recommend that anyone with an injury consult a physical therapist or physiatrist (sports medicine doctor) before  beginning any exercise program.

While I can't  speak about your specific injury, there are some tips you can keep in  mind when planning your fitness routine. If your injury is in your lower extremities — knees, ankles, feet, shins, or calves — try low-impact  forms of cardio, such as swimming, recumbent biking, rowing, and  shadowboxing with light weights in each hand. You can also continue to  do resistance-training moves for your upper body, such as back, chest,  abs, and arm exercises.

If you've sustained an  injury in your upper body, such as a rotator-cuff injury or torn biceps, for example, you can do high-intensity lower body cardio like running,  step aerobics, jumping rope, elliptical machine, spinning, and so on.   You can also continue to do exercises for your lower body, such as  lunges, squats, leg presses, and dead lifts.

Keep  in mind that many injuries stem from lack of conditioning and poor  health in the first place. As you get healthier, you should begin to  feel those sore knees getting better with every workout.  No matter  what, don't give up!  As long as you are watching what you eat and  following the tips mentioned above, you will continue to get healthy and lose weight. You may not be moving at the most accelerated pace, but  you are moving forward, not backward. That's something to  celebrate!

Let one of the Personal Trainers/Coaches from our team at Resilience help you with your workout to insure safety, wellbeing, and a workout that will be a great start towards helping you achieve your goals! Buy a package today and include a Personal Training Service!